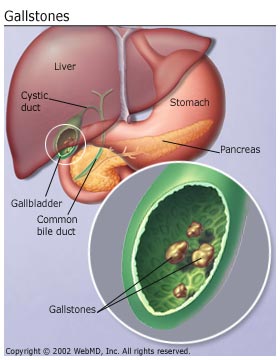 Why would I need my gallbladder removed?

One of the most common medical/surgical problems Americans face today is development of gallstones. If you know anyone who has experienced pain from gallstones, they will surely say it is one of the worst pains one can experience. Not only are gallstones painful, they can become the source of life-threatening conditions such as severe acute pancreatitis or ascending cholangitis (a condition where a gallstone can block the main duct of the liver leading to liver damage and sepsis). Most common symptoms of gallstone disease include upper abdominal pain, right sided abdominal pain, pain that radiates to the back, nausea and vomiting, and bloating.

Sometimes overgrowth of the gallbladder tissue leads to what are known as gallbladder polyps. These polyps can mimic gallstones and lead to the same symptoms of recurring pain and nausea. Other times, your primary care doctor may have ordered an Ultrasound and the scan shows an enlarged polyp (6 millimeter or greater). Polyps that are 6mm in size or greater have a higher chance of becoming a malignancy (an invasive cancer) than smaller polyps. These polyps need to be treated by taking the gallbladder out.

Dr. Chaudhry takes out the gallbladder laparoscopically and you should expect to go home the day of the procedure (outpatient surgery). Most patients are ready to go back to work within a few days. You will follow up with Dr. Chaudhry in a couple weeks after the procedure to discuss the pathology results of your gallbladder and for him to assess your progress after the surgery.